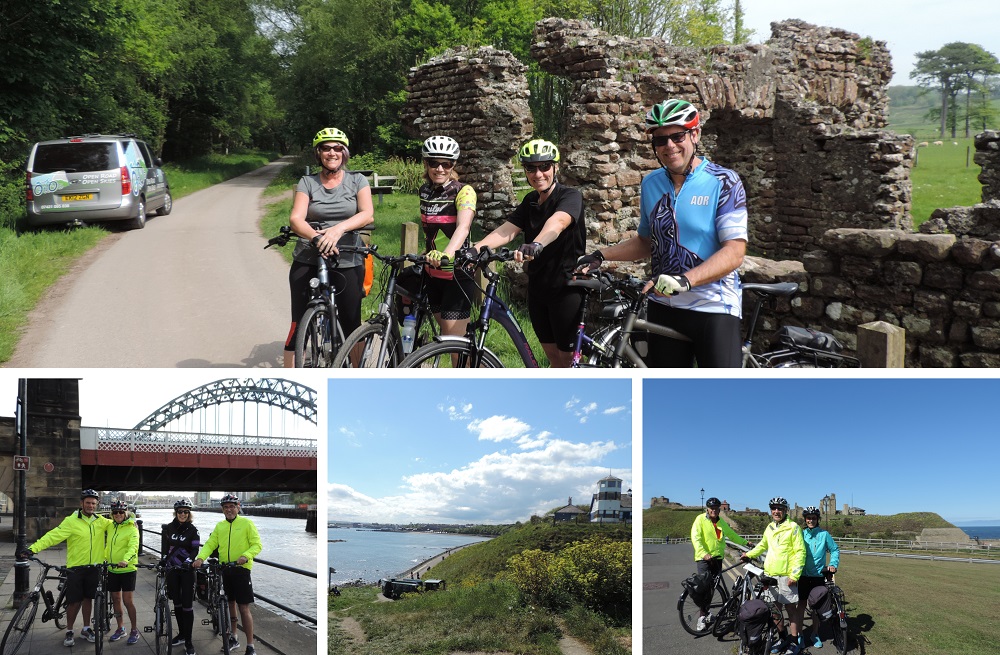 Hadrian’s Cycleway is a 174 mile (280 km) historic cycle route across the northern frontier of the ancient Roman Empire, and probably the least challenging of our coast to coast routes. As well as cycling along the UNESCO heritage site, you also skirt the north-western Lake District, cycle around Solway Coast AONB and over the Pennines before descending down to the River Tyne. Beginning in Ravenglass (or some prefer Whitehaven) Cumbria and finishes by cycling along the Newcastle Quayside, through Walsend! and onto Tynemouth, the picturesque village and it’s beautiful priory.

It’s a route packed with ruins, museums, heritage sites and the beautiful towns of Cumbria, Northumberland and Tyne and Wear. Vindolanda being one of those ruins, an archaeological site and museum near the highest point of the tour, that reveals more every day about life in Roman Britain. Hadrian’s Cycleway is a route that is flat at both ends with the main climbing done from Brampton to Once Brewed. Our tours allow you to choose how long you would like to spend discovering this area, we have tours from two to six cycling days and we can of course arrange days off for you to spend extra time in the towns you choose.

The main starting point on Hadrian's Cycleway is Ravenglass, located on the west coast of Cumbria on the Irish Sea, and is an old Roman naval base. Many tourers also begin in Whitehaven, 20 miles (32 km) up the coast and we can of course accommodate both starting points. Beginning in Whitehaven makes the tour 152 miles (245 km) long, while starting in Ravenglass to Tynemouth is 174 miles (280 km) long. We have set cycling tours lasting between two and five days (we can also accommodate people wishing to complete it in two days and those looking for longer tours, please email or call for details), how fast you ride on this coast to coast cycle is your decision.

The tour sets off north along the Irish Sea, hugging the coast as you ride around the Solway Firth before arriving in Carlisle. From Carlisle you begin to rise up into the Pennines, saying goodbye to Cumbria and hello to Northumberland, before dropping down again to meet the River Tyne. You follow the River Tyne into the beautiful centre of Newcastle, with its many bridges as it leads you out to the coast. Here there is also two possible finishing points, Tynemouth and South Shields. The tunnel to South Shields is temporarily closed so anyone looking to finish their tour there will need to jump on the pedestrian ferry which leaves every 30 minutes. Lanercost Priory, Vindolanda, Carlisle Castle and Tynemouth Castle and Priory, along with the ruins of the wall, are some of the historical highlights on this tour.

Long days and big mileage on this two day tour. First day is mostly flat, finishing in Carlisle while the second day sees you climb over the Pennines and down into h, only for the those who are used to long days on the bike.

The 3 Day tour is all go, go, go and is only advisable for regular cyclists. Averaging close to 50 miles a day over some stunning scenery, it's a tour about the journey more than the places inbetween-and what a journey it is.

Our 4 day/3 night tour cruises for the first two days across the Solway coast, ensuring you get an overnight stay in in the historic city of Carlisle, while increasing the milage a little to the wonderful town of Hexham in the second part of the tour. It's a tour long enough to get a real feel for these border counties and quick enough to do it over a (very) long weekend or a short-break.


* All prices per person based on two people sharing.

Saunter across the North! Our 5 day/4 night tour is first and foremost a touring holiday. The five days in the saddle give you the time to really look around and spend time in the places that grab you. This is truly a tour for people looking to discover what the north is all about.

Starting in Ravenglass gives you the opportunity to visit the Glannaventa Roman Bath House before you set off north along the Cumbrian coast, giving you great coastal views before coming inland and taking the traffic free path into the centre of Whitehaven.

The seaside town of Whitehavenis where a number of coast to coast cycling tours begin and end, the C2C, Reivers and for some our very own Hadrian's Cycleway , so don't be surprised to see other cyclists hanging out. Whitehaven is a charming Georgian town and well worth an overnight visit before hugging the coast on your way to Bowness-on-Solway. In between, you pass many seaside towns where an ice cream is always a good idea to help you on your way.

Further on, you enter The Solway coast, designated an Area of Outstanding Natural Beauty(AONB), an area of salt marshes and sand dunes visited by migrating birds, such as Barnacle Geese, as well as having frequent sightings of harbour porpoises in and around the Sillotharea. In Solway, the first town we come to that had been on the wall is Bowness-on-Solway. A village which was built on an old roman fort, it boasts marvellous views across the sands and marshes into Scotland. Leaving Bowness, you follow the sea inlet and wall remains to Carlisle, passing villages with numerous Roman remains-including Burgh by Sands, the village where Edward I (Hammer of the Scots) died and body was laid out. Entering Carlisle you will notice its historical significance from its vast castle ramparts to its grand cathedral. The castle is one of great importance, being where Mary Queen of Scots was held. It was also occupied by the Scots who were led by one “Macbeth” and legend has it that it was the domain of King Arthur, King of the Britons. A place of historical importance and strategic importance, Carlisle is a wonderful place to visit.

Following the UNESCO heritage site east, the wall and the road begin their gradual climb into the north Pennines. You pass some charming towns and villages including the delightfully quaint Crosby-on-Edenand also one of the must-see sights on the tour – the 13th century Lanercost Priory, a few miles after Brampton. We follow the wall for another few miles here with great views over the Irthing Valley to the south. Continuing along the route, there is a short steep climb after the village of Gisland, followed by a gorgeous two mile descent into Haltwhistle. (Two mile descents are always gorgeous, aren't they?!) Out of Haltwhistle the cycling is quite easy for the next seven miles until you come to Bardon Millwhere we start pumping those legs again for a climb towards Hadrian's Wall. We pass another must-see on this tour here – Vindolanda. This is a 2nd century Roman fort, which predates Hadrian's Wall, where you can visit both the excavated site and the Roman Army Museum while experiencing how life was inside some of the newly built wooden structures. Half a mile of climbing after Vindolanda you reach the highest point on this tour, with a six mile descent to the banks of the River Tyne on a fast straight road – enjoy with care! The River Tyne will be a sort of guide for you on your way to the North Sea.

Here, you follow a path into Hexham. Hexham is one of the larger towns on the route, it is dominated by its Abbey, while the Saxon Crypt below the abbey is an exhilarating look at the past. It's a town with history too; burnt by William Wallace, held to ransom by Robert the Bruce (so he wouldn't burn it down!) and the scene of a battle in the War of the Roses. From Hexham, it's not far to Corbridge, another Roman town with very pretty streets and stone buildings.

From Corbridgeto the North Sea is plain sailing with all the climbing behind you. First, you have seven miles of quiet country lanes until you cross the Tyne. This is where you say goodbye to the remaining cars and traffic lights and say hello to cyclists and boats on this popular traffic-free route which leads you into Newcastle. Here, close to your destination, you pass through that famous riverside panorama of seven bridges in the space of a mile. When you come to the Gateshead Millenium Bridge, car-free, cross it and follow the southern bank of the Tyne into South Shields. With six miles of coastline and three miles of riverfront, you're sure to find a fish 'n' chip shop to celebrate your successful crossing of Northern England, to be washed down with whichever beverage you deem appropriate!

Check out our social media pages