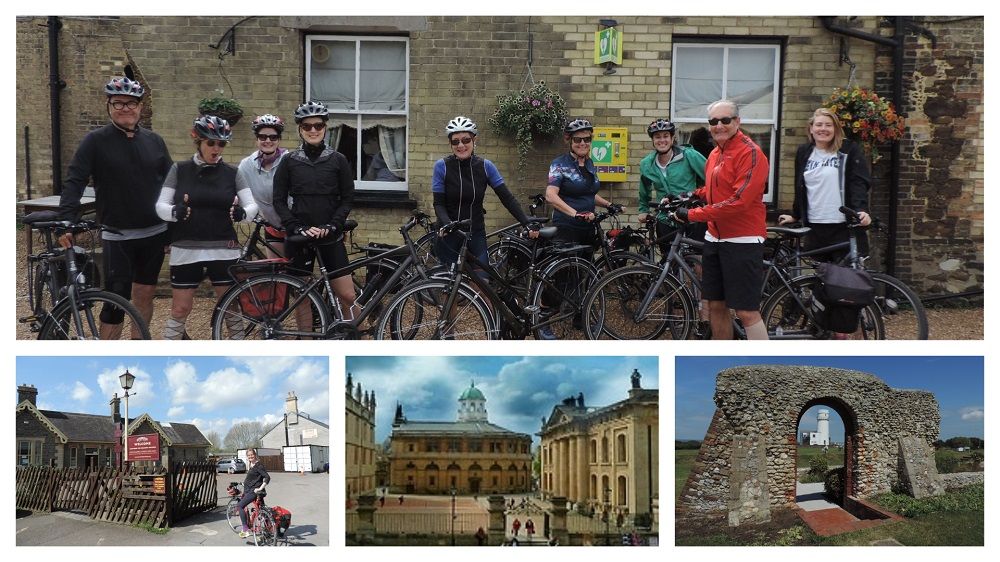 Starting in the coastal town of Portishead, looking over the Severn Estuary, finishing over 265 miles (426 km) east in Hunstanton overlooking The Wash.

A coast to coast trip through historical southern England, it's a ride which takes in some of the most famous cultural places in The UK including Oxford and Cambridge, The city of Bath and market towns and cities like Portishead, Kings Lynn, Marlborough and Bristol. We also pass through Areas of Outstanding Natural Beauty such as The Cotswolds, North Wessex Downs, Chilterns, and the Norfolk Coast.

This bespoke supported tour can be booked between four days and however many days you wish to take, a four day tour would average over 60 miles (97 km) per day, while a six day tour would average over 40 miles (64 km) per day. The supported tour includes bed and breakfast, a support vehicle which leap frogs you throughout the day, the support vehicle – which is always a phone call away - will also carry some spare parts, snacks, fruit, tea, coffee and water for you to have at your convenience, daily luggage transfers, daily briefing on route and what to expect, maps, and transportation back to the start of the tour if required. The tour is flexible and can be amended to fit a group's wishes and requirements.

The tour can arranged to allow you to spend more time in certain places, you can also arrange to have a cycling free day – giving you the opportunity to discover iconic places like Oxford, Cambridge or Bath. The tour finishes in Hunstanton, which sits on the Wash on the east coast where you can choose to stay the night and watch the sun set over the sea, one of a few places you can see this happen on the east coast of the England. 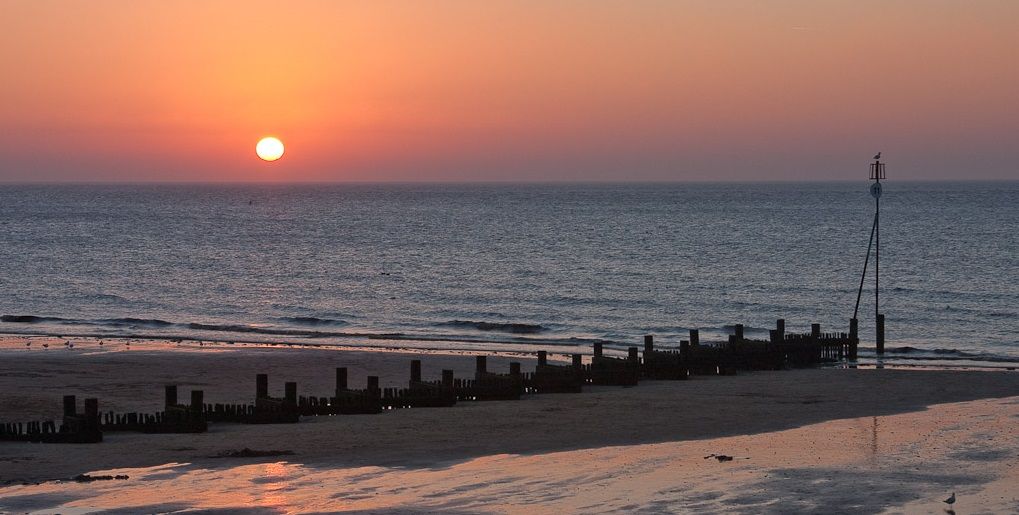 Your tour across historic southern England begins in the beautiful coastal town of Portishead. Located in northern Somerset on the Severn Estuary, it has sweeping views of the estuary and the Welsh coastline. The town name was made famous by the Bristol band Portishead, who named themselves after themselves after the historic fishing village.

It's Bristol that you head towards on your first morning and after a very short ride you find yourself riding under the famous Clifton Suspension Bridge before arriving in Bristol Harbourside, an area of cafes, bars and pleasure boats with great views of Bristol Cathedral. Bristol itself is a great place to cycle, which has helped it become the European Green Capital, it was also England's first 'cycling city' in 2008 and Sustrans, the sustainable transport charity, has its headquarters here. It is here you jump onto one of the first cycle paths to be built and maintained in the UK, The Bristol and Bath Railway Path. The path curves through the Avon Valley on its 17 mile journey to Bath. After passing Gaius Sentus, the giant sculpture of a Roman sentry, you might begin to smell the distinctive hoppy scent of the Bath Ale Brewery where you can stop for a quick tour round the Brewery and even get to sample one of their ales. After leaving the brewery you follow the tracks of the steam-powered Avon Valley Railway which follows and criss-crosses the Avon River on its way to Bath. This beautiful city has itself been designated a UNESCO world heritage and is the only place in the UK where you can bathe in natural hot spa water and in original Roman style baths.

Riding out of Bath you take the Kennet and Avon Canal, heading towards the North Wessex Downs with the honey-golden buildings of Bath behind us. Cycling in this part of the Cotswolds is absolutely gorgeous, passing two grand aqueducts, Avoncliff and Dundas, in the first few miles out of Bath, with great views on top of both. We pass on through the charming towns of Bradford-on-Avon and Trowbridge, the latter being Wiltshire's county town. Before you arrive in Devizes you cycle into the Caen Hill Locks, a very impressive and popular lock flight. Through Devizes and you head north through Bishops Canning to Avesbury. Among all the historical places visited on this tour, Avesbury is a prehistoric jewel. It has the world's largest prehistoric stone circle all inside a charming little village, and with grazing animals roaming around this UNESCO world heritage site making it all more real and impressive, and unlike most other heritage sites. Leaving Avesbury we continue east towards the bustling market town of Marlborough, where we spend our second night in the beautiful North Wessex Downs AONB.

As we cycle through this ancient gently rolling pasture land we will see why it was valued so much by so many tribes, from the Pagan tribes to the Romans right through to the ancestors of today's occupants, the Anglo-Saxons. Animal grazing is very popular here and horse racing forms a big part of the local industry as the turf here is underlain by chalk, making it perfect for galloping horses. It is also where the term steeplechase comes from, a horse race from one village to another, using the church steeples - visible over the rolling landscape - as navigation points. A little after entering Oxfordshire, you leave the Downs behind but continue passing quaint English villages. Finally you enter Oxford, the county town of Oxfordshire, home of the world famous university, with architecture that has inspired people from Lewis Carroll to J.R.R Tolkein right through to Philip Pullman.

You now continue your north-east trajectory through Oxfordshire, leaving it behind in the town of Thame on the banks of the River Thames and enter in Buckinghamshire. You again continue north, through charming towns and villages like the county town of Aylesbury, to Bletchly. Bletchly is the home of Bletchly Park, the headquarters for the UK's codebreaking team during WW2, the team that was led by Alan Turing that succesfully cracked the code of the Nazi Enigma machine. This site is now a museum and a very interesting place to visit

You now head back into the gentle rolling hills of southern England aiming towards that other world famous university in these parts, The University of Cambridge. The first big town you come to is Bedford, the county town of Bedfordshire, which sits on the River Great Ouse and is the river that we follow on and off for almost the remainder of the tour. We jump onto a cycle path here, known as the university way because it follows the path of the Varsity Line railway, a railway which used to link the cities of Oxford and Cambridge. A very peaceful 9 miles later you find yourselves in the town of Sandy, home to the RSPB, which should remind us to keep an eye out for the Goldfinches, Yellowhammers and our other feathered friends which frequent these tranquil parts. On the way out of Sandy you will pass the lodge, the HQ and viewing area for the RSPB and then you are back into the open countryside. You again pass through quaint villages and hamlets before entering into the city of Cambridge, a city of rich Gothic architecture, where people ply their trade punting passengers down the river, a city of cycling students, a university city, and the city of Isaac Newton, Lord Byron, Stephen Hawking and David Attenborough to name but a few.

On leaving Cambridge you follow the picturesque River Cam, passing its punts, boats and rowing boats as you make your way north towards the junction with the River Great Ouse. A little before the town of Ely you pick up the river which leads us past Ely as it makes its way slowly towards the coast. A little further down the river bends for the first time in a few miles and winds its way into Downham Market.

You now say goodbye to Downham Market and sett out for the Wash AONB. Heading north through tranquil countryside you again pick up the river Great Ouse which takes you through farmlands to King's Lynn. King's Lynn is part of the Hanseatic league, a modern collection of medieval market towns on the North Sea and the Baltic Coast. It has architecture to showcase its history through the ages including Hanse House, the Old Gaol House and the Customs House, dating from the 1400's to the 1900's. Leaving King's Lynn and you are on your final stretch to the coast. Cutting through Dersingham Bog Nature Reserve you pass through the villages of Castle Rising with its magnificent 12th century castle of the same name, Babingly with its 14th century ruin of St. Felix parish church, Inhgoldisthorpe and Shettingham and into Hunstanton. Hunstanton is famous for its red and white stratified cliffs, amazing sunsets over the wash (because of the curve of the cliffs it looks west over the wash!) and its superb coastline. It is here you can spend your final night on this engrossing coast-to-coast tour, and now it's time to celebrate and reminisce on a holiday well done.