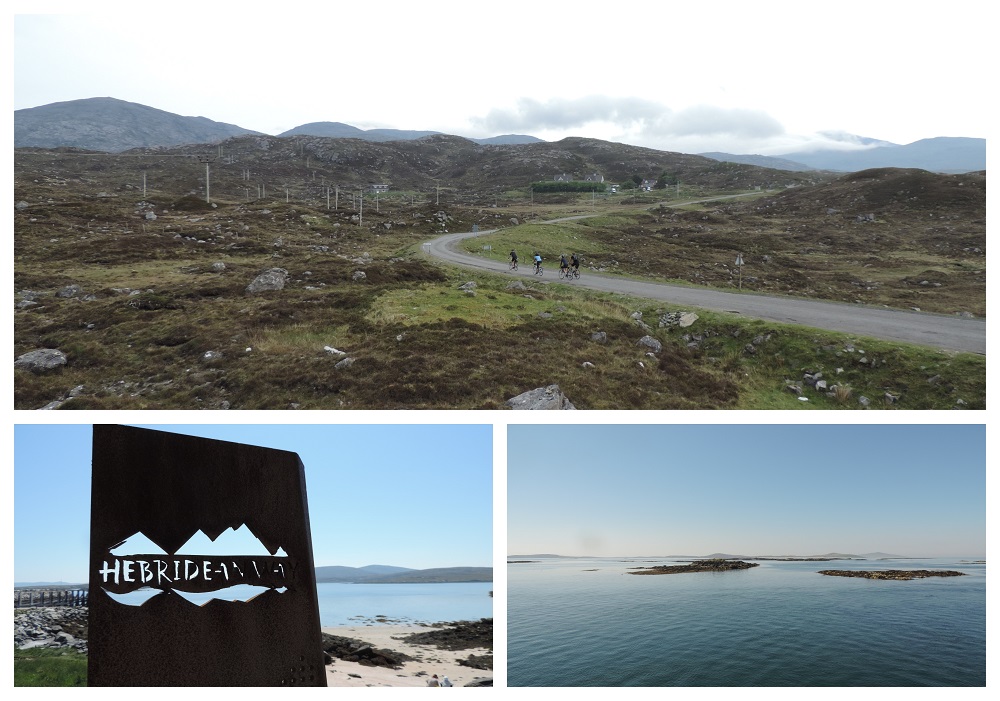 Wild and wonderful fully supported cycling adventures on the north-west coast of Scotland. Our supported tours in Scotland are tailor-made to suit each individula group. Our mapped tour below starts in Glasgow, follows the Clyde cycle route and the Loch Lomand cycle path. We then transfer you to the Caladonian Way where you would ride into Oban. From here you would get a ferry to Castlebay on the islae of Barra and the beginning of the Hebridean Way cycle route along the Outer Hebrides. This can also be booked for just the Hebridean Way.

We can also offer bespoke tours along the Caledonian Way, among the Inner Isles as well as Loch Lomand and the Outer Hebrides.

These tours can only be booked on a group basis and is not open to join for single riders. It can be amended to suit your groups needs. Please get in touch with us for group prices or if you have any questions about this tour, you can email This email address is being protected from spambots. You need JavaScript enabled to view it.

An amazing tour, journeying through truly iconic places such as Glasgow and the Clyde, Loch Lomond, the Highlands, the Caledonian Way and the islands lying on the edge of the Atlantic. The islands and Highlands are stunningly beautiful and each part different in its own right. It's a region steeped in Gaelic heritage, with its own flora and fauna including many birds of prey soaring overhead.

This bespoke supported tour can be booked between five days cycling and however many days you wish. The supported tour includes bed and breakfast, a support vehicle which leap frogs you throughout the day, the support vehicle - which is always a phone call away – will also carry some spare parts, snacks, fruit, tea, coffee and water for you to have at your convenience, daily luggage transfers, daily briefing on route and what to expect, maps, and transportation back to the start of the tour if required. The tour is flexible and can be amended to fit a group's wishes and requirements. The cost of this tour includes all ferry rides for example; Oban to Castlebay, where whale watching boats ply their trade, and short hops across from Barra to South Uist, North Uist to Harris and Harris back to the Mainland before transfer back to Glasgow. The ferry times at Stornoway are morning and midday this means we have to stay a night in Stornoway at the end of the tour, meaning the tour that is sold has the same number of nights as it has cycling days. For those needing to get away earlier, there are flights out of Stornoway Airport, please advise us of this at time of booking and the time of your flight.

Starting around Bell's Bridge in Glasgow, you begin your tour following the banks of the Clyde out of the city, past the Scottish Exhibition and Conference Centre, the SSE Concert Hall, and the Finneston Crane – all distinctively Glaswegian structures. After passing through Clydebank you jump on the Forth Clyde Canal Tow path, cycling towards the River Clyde, which you join after the towering Erskine Bridge. On to Dumbarton, where you pass the stunning Dumbarton Rock with its castle perched on the top. In Dumbarton you cross the River Leven and follow its west bank north towards Balloch village, sitting on the southern edge of Loch Lomond. After passing the beautiful 19th Century castle, you jump onto the banks of Loch Lomond with immediate views up the loch and of Ben Lomond, the most southerly of Scotland's Munros.

From here, we take the 17 mile (27 km)cycle path to Tarbet, a path which hugs the path and is traffic-free apart from two short stretched on minor roads. As you travel north from Balloch, the surrounding mountains become more dramatic with the peaks rising higher, you are also travelling through rich woodland, passing by ancient oak trees with the sound of woodpeckers and the rustling of woodland animals all around us. On the way to Tarbet, you pass through the pretty village of Luss, which was rebuilt by the local laird to accommodate his workers in the 19th Century. Tarbet itself is a charming village, separated from the sea by only a 1.5 mile strip of land. It is an old town full of stories, a place which has seen raiding parties from the Vikings to the famous clan McFarlane. From here you poip over the hill to the neighbouring town of Arrochar.

From Arrochar we transport you to the hamlet of Ford on the banks of Loch Awe. Here you follow the Caledonian Way north along the roller-coaster ride that is this cycle route is. At Taynuilt you head west, you follow this cycle path through stunning countryside all the way to Oban where we pick up our ferry to the Outer Hebredes, the Island of Barra and Castlebay. The ferry journey itself is glorious, passing the Isle of Mull and the mainland to our south and through the sea where whale watching boats go in search of seals, dolphins and the occasional killer whale.

You set out from Castlebay on your journey along the spine of the Outer Hebrides, looking to take advantage of the prevailing wind. It is a stunning ride with breathtaking views of golden beaches surrounded by mountains and valleys, circled overhead by eagles all in a place with deep cultural roots and heritage. Your 9 mile tour through the Isle of Barra takes you to the ferry port near Ardmhor for the quick trip accross the Sound of Barra to the nearby island of Eriskay. Back on the bike, you travel north through Eriskay past Ben Scrien to the east and on to the causeway over the Sound of Barra to the island of South Uist with its myriad of lochs and mountains to the east and immense stretches of beaches to the west. Continuing north you follow the eastern path up through the island, crossing over Loch Bi and the causeway over to the Isle of Benbecula, a place of stories and spectacular scenery.

Next sees you travelling through a number of isles, starting of with Benbecula before taking the causeway over to North Uist and on to Beneray where you catch the ferry to the Isle of Lewis and Harris, the final Island on your tour and the largest. You pass through Benbecula through its spine and follow North Uist up its spectacular west coast with its awesome stretches of white beaches which are surrounded by aread of Machair grasses, found all over the Hebrides. After passing over to Berneray, you jump on the short ferry ride to Leverburghand the Isle of Harris.

From Leverburgh on Harris, you shoot up the east coast of the island along the “Golden Road” with its many switchbacks to the charming port town of Tarbert where you can visit the local Harris Tweed Shop and spend your sixth night. The ride today takes us past the hamlets and villages of Rodel and its 16th Century St Clements Church, Manish and Aird Leimhe to name but a few on our climb and decent to Tarbert. Leaving Tarbert on our way to Callanish and the Isle of Lewis, you first need to climb over the North Harris Hills and the highest hill in the Outer Hebrides before descending down to Loch Seaforth. You then follow the road to Stornoway, past landmarks such as the land struggle memorial to the heroes of the lochs and hamlets like Balallan and Leurbost on Loch Erisort, before you turn west across the island towards Callanishand its famous standing stones and your seventh and penultimate night on the tour. The main monument is extraordinary to look at, it is cross shaped with a central circle running around it and it is dated back to 3000 BC.

Leaving Callanish, you head out on our final day's cycle up the west coast of Lewis to the port of Ness, hugging the wild Atlantic and passing through the moors and peat bogs, where people used to get their heating from. You pass Arnol Blackhouse, where you can enter a traditional and perfectly preserved Hebridean home where you can get an impression of the past; and Dun Carlowary, an iron-age fortification for an even more ancient glimpse into the past. You finally arrive at the Butt Of Lewis: its famous lighthouse and the most northerly part of the Outer Hebrides, our Destination and the time to celebrate a holiday well done!