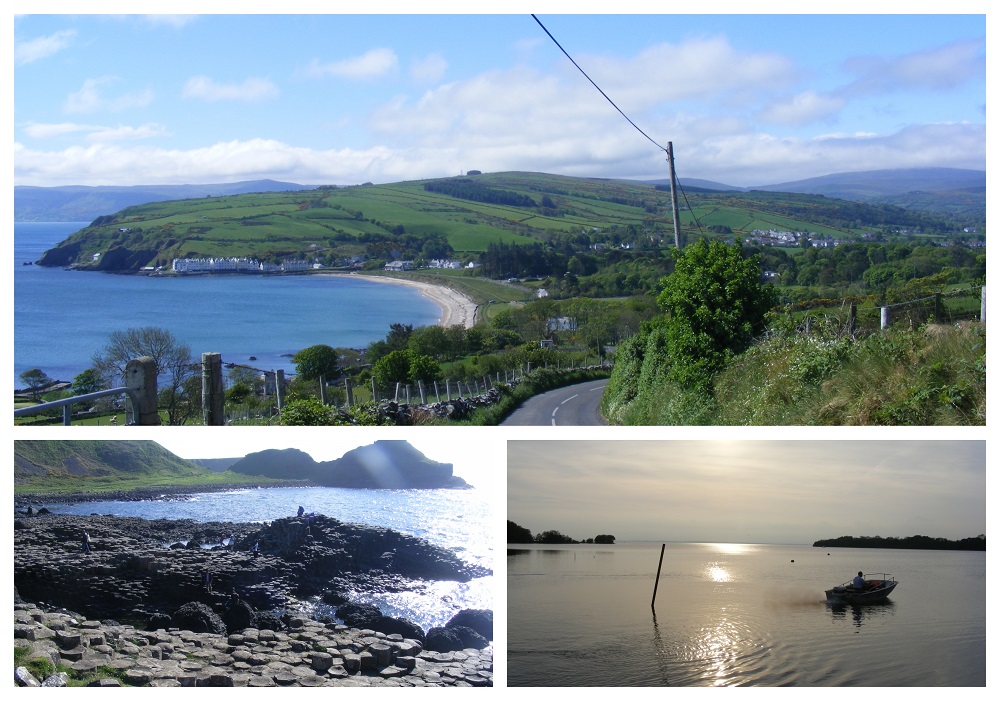 The legendary land of Fionn Mac Cumhaill and St Patrick, the land of giants.

A fantastic way to see the land behind the stories of St Patrick and Fionn Mac Cumhaill - cycling around the Causeway Coast, the Glens of Antrim, Slemish, Downpatrick and the Mournes. It's a route that begins in Portrush before setting off east around the stunning north coast passing the Giant's Causeway, Torr Head and it's views to Scotland and the Mull of Kintyre, down the antrim Coast, over the beautiful Glens of Antrim AONB and into Belfast and this is only the first section. The tour also takes you along the mighty Strangford Lough to Downpatrick, from here you travel through the Mourne Mountains and back north to Armagh where you finish your tour and are taken back to Belfast.

The table below shows costs for groups of eight cyclists, for larger or smaller groups please contact us for prices - This email address is being protected from spambots. You need JavaScript enabled to view it.

This bespoke supported tour can be booked between three days cycling and however many days you wish, a three day tour would average over 60 miles per day, while a six day tour would average around 30 miles per day. The supported tour includes bed and breakfast, a support vehicle which leap frogs you throughout the day, the support vechile - which is always a phone call away - will also carry some spare parts, snacks, fruit, tea, coffee and water for you to have at your convenience, daily luggage transfers, daily briefing on route and what to expect, maps, and transportation back to Belfast or to the start of the tour if required. The tour is flexible and can be amended to fit a group's wishes and requirements.

On this tour you get the chance to visit some iconic places including The Giant's Causeway, The Old Bushmills Distillery, Carrickfergus Castle, while wandering through world famous towns and cities like Belfast - birth place of the Titanic, Antrim-the city with two Cathedrals and Downpatrick where St. Patrick was laid to rest.

This tour takes in some of the most stunning scenery in Ireland: Torr Head and it's views across the water to the Mull of Kintyre, The Glens Of Antrim, the Antrim Coast, the mighty Strangford Lough, the dark and imposing Mourne Mountains on the way to Newry and Armagh. It also gives you the chance to experience Irish folk legends first hand; learn how Fionn Mac Cumhaill built the enchanting and bewildering Giant's Causeway or discover modern Ireland while visiting Belfast.


Starting in the seaside towns of Portush and Portstewart just north of the bustling University city of Coleraine. Hugging the coast, and the Atlantic, cycling past sand dunes, golden beaches, ice cream parlours, cafes, pubs and restaurants, as well as the famous Royal Portrush Golf Club and the magnificent Dunluce Castle standing guard over the Atlantic Ocean. Following this stunning rugged coastline, you can make your way into Bushmills, home of the famous whiskey distillery. Although it could be a bit early to sample, it'sow it's made and how it all began in the Old Bushmills Distillery Museum and maybe get a taste for later on that night/on the tour. Leaving Bushmillsbehind, you head straight towards the iconic site of the Gaint's Causeway, which legend has it was built by Fionn McCumhail and his Fianna.

After having a good wander round the basalt columns you continue back down the causeway road with absolutely stunning coastal views to your left and rolling farm land to your right. Ballycastle, on the north-easternmost coastal tip of Ireland, on the edge of Antrim Coast and Glens Area of Outstanding Natural Beauty (AONB), and with views of Rathlin Island and the Mull of Kintyre is next.

Ballycastle to Carnlough, goes over Torr Head with its remarkable views over to Scotland and the Mull of Kintyre, short sharp ascents and descents and rugged coastline shaped by the crashing waves of the Atlantic below. From Ballycastle you turn onto Torr Head Road in Ballyvoy, following the historical coastline up and around to Cushendun. Coming off Torr Head you get marvellous views of the seaside village below with its beach and sportsfield out in front. From Cushendun you cycle on to Knockcurry with another climb over to Cushendall and back to the coast and the spectacular Antrim Coast Road. This takes you through the villages of Waterfoot and Glenarrif to Carnlough, which its picturesque harbour on the shores of Carnlough Bay and our second night.

You now leave the coast road after a few miles and head into the Glens of Antrim. You are now cycling up and around the area where, reportedly, St Patrick was held as a slave around Slemis and where he was forced to work. You now make our way up the glens and then descend down out of them towards the coast and Carrickfergusand its imposing castle where we can take a look at life in the 17th Century. Saying goodbye to Carrickfergus, you head straight to Belfast, following the coast and mostly on traffic-free cycleways. Belfastis a modern cosmopolitan port city. It was the birth place of the Titanic, it has a myriad of museums, theatres, restaurants and cafés, and is packed full of beautiful architecture, as well as local city tours highlighting the city's troubled past and vision for the future.

Leaving Belfast you head south towards Downpatrick. You exit Belfast via the Comber Greenway, a peaceful green corridor that passes some of Belfast's impressive landmarks, including the Titanic Belfast Centre, C S Lewis's statue and views of The Stormont Estate, arriving in Comber 7 miles later. From Comber you skirt down the western edge of Strangford Lough passing picturesque villages, ports and marinas. The lough itself is a sea lough and contains a wealth of wildlife in a variety of habitats. It is also the largest sea lough in the UK or Ireland and is one of only three Marine Nature Reserves in the UK. Arriving in Downpatrick, you are arriving in a historical town from ancient times and one that is said to hold the last remains of St Patrick. There is also the church in Saul, which was built to commemorate the site of the first church built by St Patrick, amongst many ruins, museums, cathedrals and churches also dotted around Downpatrick. Downpatrick is also the site of our 4th night on the tour.

Next we're off to Newry. You are surrounded by farming country and in the shadow of the imposing Mourne Mountains, which are an AONB, and an outdoor pursuits paradise with hill walking, rock climbing, mountain boarding and biking, fishing, golf and horse riding all on offer, as well as stunning views and charming villages. Your next town to pass through is Newry, an old market town that was first founded by Cistercian Monks in the 12th Century. Bagenal's Castle, which is a 16th Century house, can now be visited and holds artefacts from the Cistercian Abbey, the Gaelic order and its relationship with the British Crown.

At the end of the tour you ride from Newry to Armaghand is mostly ridden on an old converted canal tow path. This makes for a peaceful ride through Brackagh Moss Nature Reserve or the Brackagh Bog, an area where turf used to be cut for three centuries, but is now a maze of streams and drainage ponds containing a variety of rare plants and animals. After leaving the tow path, you follow country lanes and roads through pastoral land to Armagh, the city with two St Patrick's Cathedrals, the ecclesiastical capital of Ireland and the seat of the primates of Ireland for both the Roman Catholic Church and the Church of Ireland. While being the smallest city in Northern Ireland there is still plenty for people to do and see, including ancient forts, planetariums, museums, not to mention pubs and restaurants.